One of the things that I’ve enjoyed thus far in my chances to observe in elementary classrooms is the excitement and quick pace of lessons compared to many lessons as the secondary level.  On these lines, I had the opportunity to sit in on a short and fun lesson in Karyn Pettit’s Pre-Kindergarten classroom recently, and enjoyed seeing the fresh excitement for learning embodied by her classroom. 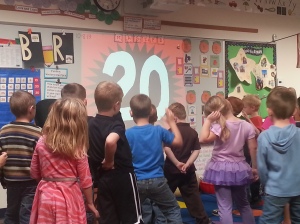 The lesson I sat in on was focused on beginning sound recognition, using a computer-based game.  Essentially, the screen displays a column of colorful objects(chickens, numbers, etc.), and students would get a chance to go to the board and use the interactive pen to drag one of the objects from the column to a column in a grid with other objects that had the same beginning sound.  For instance, a picture of a bone would fit in the grid column with a basketball at the top, and the number four would fit in the grid column with a fish at the top.  Students were excited about their chance to get up to the board to work with the activity, and the graphics and audio from the game were engaging.  After everyone had a chance to go to the board, Ms. Pettit switched to a YouTube video that was essentially a counting song (to 20).  The students had a blast singing and dancing with the song.

The pace of the lesson was quick to keep students engaged, but paced such that the concept of the lesson was reinforced.  The technology was never the focal point of the activity, which is – to me – the ideal when integrating technology in the classroom.  Students were not excited to go to the front of the room so that they could use an interactive pen to control a projected image; rather, students were excited to go to the front of the room to get their chance to solve a problem and demonstrate what they had learned.  To me, this kind of transparent use of technology as a tool is what should be striven for as it relates to technology integration.

Thanks again to Ms. Pettit and her class for letting me sit in on a lesson!