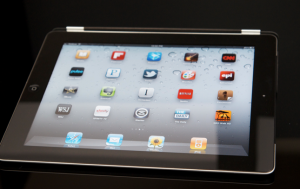 While iPads offer a wonderful form factor and user interface for kids, in addition to being highly mobile and flexible devices, Apple has done no favors to its enterprise customers (like us) who would like to be able to manage iPads in the same ways that we manage OS X or Windows devices.  While iOS is tremendously easy for users to work with, the compromise for that ease is that apps cannot be silently deployed (without user input) to iPads, technicians cannot remotely control them to install software or solve problems, and operating system updates cannot be forced remotely (or disabled until they’ve been fully tested, for that matter).

This makes iPad app distribution a bit of a tricky matter, especially compared to the simple, silent distribution that we can achieve with other devices.  In this post, I’ll break down the various paths to app distribution; hopefully this will answer some questions about why we do what we do, and will help to guide teachers and community members to a better understanding of how the district handles iPad apps.

Base Set of Apps: All district-owned iPads receive an initial, base set of iPad applications during an initial imaging process.  These include free applications such as Dragon Dictation, Google Earth, Kindle, Skitch, and Evernote, to name a few.  During this process, the iPad also receives its wireless configuration, is linked to our Casper server (see previous blog post), and is linked to the district’s primary iTunes account.

Free Apps: Free apps can be downloaded in one of three ways.  First, a user can submit a request to the technology department to add the app to our Casper Self Service system.  This allows users to open the Self Service app – installed by default on all district iPads – and choose which district-distributed applications to install.  Second, a user can use the district’s iTunes account to “purchase” a free app directly from the app store.  This allows users who are familiar with the app store to easily obtain applications in the way that they’re used to, although they’d need to go to the app store and search for the app on each iPad they wish to install the app on, which is somewhat more tedious than using the first approach when installing on many devices.  Third, users can log in with their personal iTunes account to obtain free or paid apps that they own personally, but that can be installed on a district device.  While this is perfectly legitimate, it can cause problems when it comes to updating the application, as the application can only be updated by the account that was used to install it.  Further, users must make sure to log out of personal accounts prior to the device being used by somebody else so as not to compromise sensitive information stored in the account.

Paid Apps: In order to obtain district-purchased applications, staff must submit a request to the technology department to purchase the app, the quantity to be purchased, and note the funding source that will pay for the app.  By law, PPEL funds cannot be used for educational software, but PPEL has allowed us to relieve pressure on other building-level funding sources that can pay for iPad apps.  Once this information is submitted, the district purchases the appropriate number of licenses through Apple’s Volume Purchase Program, which provides volume discounts and centralized management of purchases, and makes them available through Casper’s Self Service app on the iPads. 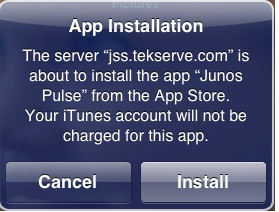 The big sticking point of any of the aforementioned approaches, however, is that the apps must be installed individually on each iPad, so if a teacher wants an app to be available on all of the iPads in a mobile cart, it will need to be installed (from Self Service or the App Store) on each iPad.  Casper does actually offer a way to push apps out to iPads, such that an app could be pushed out to all 450 of the district’s iPads at once, for instance.  That said, limitations of iOS require that the end user click several “Install” prompts (like the one to the right) and enter the district’s iTunes password.  Since there’s no way to know who is using an iPad when an app is pushed out, this results in problems whereby a young student using an iPad wouldn’t know what to do, an older student wouldn’t know the password, and both students would probably just cancel the installation, resulting in many iPads that didn’t get the intended application anyway.  Indeed, the only iPads that would be easy to push apps to would be teacher-assigned iPads, but in this case the benefit is slight since teachers would only need to install the app to their own, single iPad in that case anyhow.  In a meeting last week, I asked one of Apple’s engineers about whether they had a plan to offer a more enterprise-friendly approach to app distribution, whereby I could push out iPad apps and they could be installed without end user input (or at least without the end user needing to know the district’s iTunes password), and was told that they don’t have any plans for that in the near term.

Large scale update operations (i.e., to a new version of iOS) will be handled through a combination of providing instructions to end users (who can easily update devices on their own) and an annual reimaging of mobile cart iPads to ensure that they are reasonably current.